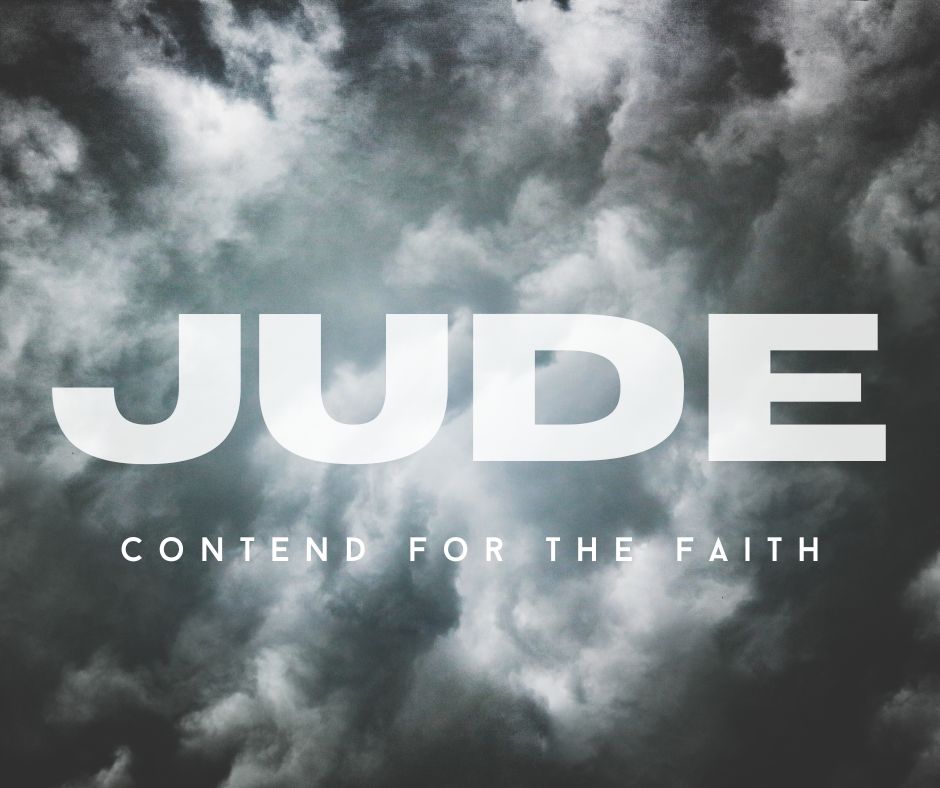 Jude is the last book before Revelation and is one of the shortest books in the Bible, approximately 461 words (in Greek),[1] making it the fourth-shortest book in the New Testament.[2] Jude has been called the ‘most neglected book in the New Testament.’[3] Carson and Moo explain that Jude is a timeless book addressing issues found in every generation; “The atmosphere of postmodernism in which the church now lives requires us to guard vigilantly against the temptation to welcome heresy in the name of ‘tolerance.'”[4] This short book is a timeless book to Christians about how false teaching can creep into any church. This word of exhortation is a word of exhortation to you and me. In these short 25 verses, we find a challenging book that we often have never read or have even studied.

Jude is the author, and he tells his audience three things about himself: his name, his calling, and his family. Firstly, he tells us his name, Jude is how it is commonly translated but more literally it would be Judas (Greek) or Judah (Hebrew). Now, this can give us a whole list of people by this name in the New Testament. Judas Iscariot, Judas Thaddeus (the other disciple who is called “not Iscariot” (John 14:22) or Son of James (Luke 6:16). Judas of Galilee who became notorious for his rising of a radical political group (Acts 5:37). Fourthly, is the missionary who we commonly refer to as Barnabas, whose name was Judas (Acts 15:22, 32). Lastly, Jesus’ half-brother, Judas is mentioned when the people question Jesus because he is the carpenter’s son, Mary’s son and they list his four brothers. We are given five names in the New Testament that could fit this profile, we can rule out Judas Iscariot and Judas of Galilee. It could be Judas Thaddeus or Barnabas, but the reason they would not qualify this especially because it seems more common for them to use their other names, Thaddeus or Barnabas. It could be another Judas altogether but this seems likely for the lack of introduction.

With this in mind the fifth and most likely candidate is that is Jesus’ half-brother. We can confirm this by the third thing he tells us about himself is that he is the brother of James. Again, he has no additional information as to who this James is, so you must assume that this James is known by the original audience. This could be speaking of James the apostle, however, this is unlikely because he is referred to as his relationship with John and he died by the hand of Herod (Agrippa I) (Acts 12:1-5), this occurred around AD 44, earlier than we assume Jude was written. The more likely candidate is that the early church knew which James this is writing about because of James’ position in the church in Jerusalem (Acts 15), this then would fit with the most likely candidate from his name.

What makes this interesting is his calling. Jude, along with his other brothers, did not believe Jesus at first during his earthly ministry (Matt 12:46-50, John 7:5). Yet some time from this point in his ministry and the writing of Jude, Jude now calls himself a servant of Jesus Christ. Derek Thomas once said if you want to be able to find proof in the Bible of who Jesus is you know when you look at both James and Jude, the brothers of Jesus, and they call themselves his servants. Siblings never seek to call themselves another siblings servant. More specifically, ‘slave’ is probably a better translation for this word. However, Jude and James saw themselves as Christ’s servants. Jude could have tried to use his relationship with Christ as his half-brother to try to make others listen to him, however, his business card does not seek to lift himself so that others may listen, but he lifts Christ up and seeks to be able to serve him.

Now, often the author tells us exactly who he is writing to, we find this common because we are used to reading the Apostle Paul’s letters which are known not as 1 Paul, 2 Paul, etc but Romans, Corinthians, and Galatians. However, that formula does not work for James, Peter, John, or Jude. In some way, we know exactly who this letter is for because we are told, but in another way, we have no idea who this letter is for because we have no details. We are not told who or where this letter is to be sent. Some have seen the similarities between Jude and 2 Peter, and therefore have dated them to the same period in the 60s before the destruction of the Temple in 70 AD. This would mean many Jews were forced to leave Jerusalem and this letter could be written to those exiles in various parts of the world. Jude quotes and refers to many Jewish sources, which would include this directed more to a Jewish audience, but that does not mean it is exclusively Jewish. So, in that way we do not know the address to whom this letter is written. However, Jude tells us who the readers are, those who are Called, Beloved, and Kept. This is one of my favorite summaries of the Christian in these three words. It is my favorite for many reasons, some because it is nothing about what you do, but who you are and that these are actions that have nothing to do with the believer but God’s relationship with the believer, that called by God, beloved by God and kept by God. I love this because it is Trinitarian we are called by the Spirit, beloved by the Father, and kept by the Son.

Called by the Spirit

The audience of this letter is specific to those in the church, the word Call means exacted that, that there are people who have been called out, from others. Paul says in Romans 1:7, “To all those in Rome who are loved by God and called to be saints: Grace to you and peace from God our Father and the Lord Jesus Christ.” Paul used this term to signify not only we are called out but called to be holy, called for a purpose. Earlier Paul said, he was called to be an apostle (Rom 1:1). This letter is written for those who have been called out from the world, called out of their life of sin and misery. This calling although can mean a general proclamation to all people, (Matt 22:14). However, in Jude, I think it speaks to those who have responded to this call, those who Matthew would fit into the few categories of those who are chosen. These three words are tied together, if Romans 8:28-30 is the golden chain of salvation then this short line in Jude is the gold bracelet of security for believers. One commentator explains it like this, “Like a river, the words when put together flow effortlessly, soothing weary listeners in need of shoring up their faith.”[5] The word called, in Greek is connected to the other two words, beloved and kept. Jude reminds his readers that they are different, not because of who they are in society but because the Holy Spirit has called them out of this world to live as holy men and women. Oh, how we need to be reminded every day.

Beloved by the Father

We are loved, not because you or I are lovely but because of God’s love towards us. John understood this as he writes of himself as the disciple whom Jesus Loved (John 11:3, 5). He not only wrote about himself that way, but he also wanted his readers to know this as well (1 John 2:7). Actually, every single author in the New Testament uses this word at some point in their writings to speak of believers. Jude explains that those who are called, are beloved by God the Father. Not only he wants to point out that they have been called out of the world but called into a family. Once enemies of God, now children of God, who are loved. Again, what have we done to deserve this love, nothing? As Paul writes in Ephesians, “For this reason I bow my knees before the Father, from whom every family in heaven and on earth is named, that according to the riches of his glory he may grant you to be strengthened with power through his Spirit in your inner being, so that Christ may dwell in your hearts through faith—that you, being rooted and grounded in love, may have strength to comprehend with all the saints what is the breadth and length and height and depth, and to know the love of Christ that surpasses knowledge, that you may be filled with all the fullness of God.” (Ephesians 3:14–19).

Jude then explains that we are kept by Jesus Christ, the glorious truth found throughout the scripture that the Father gives to the son who are his, and the son never loses them, as Jesus explains, “All that the Father gives me will come to me, and whoever comes to me I will never cast out” (John 6:37). The comforting truth to believers, that we are kept by Christ. Cain answered and said, “Am I my brother’s keeper?” Christ answers and says, I am my brother’s keeper. I will by no means cast out. I have used this example before but it is such a good quote, you will have to forgive me.  John Bunyan’s book “Come and Welcome to Jesus Christ,” or by its puritan title, “A Plain and Profitable Discourse on John 6:37. Shows the cause, truth, and manner of the coming of a sinner to Jesus Christ; with his happy reception and blessed entertainment.” John Bunyan lays out the blessed host welcoming his guests to the table he has prepared for them, in this great book he shows this gracious host not only welcomes but also does not cast out those at his table,

But I am a great sinner, sayest thou.

But I am an old sinner, sayest thou.

But I am a hard-hearted sinner, sayest thou.

But I am a backsliding sinner, sayest thou.

But I have served Satan all my days, sayest thou.

But I have sinned against light, sayest thou.

But I have sinned against mercy, sayest thou.

But I have no good thing to bring with me, sayest thou.

Jude begins his book by laying the foundation for what we need to be reminded, of every day. That we are called, beloved, and kept.

Jude explains our Trinitarian name and then a prayer he has for those that the letter is written.

“May mercy, peace, and love be multiplied to you.” (Jude 2). We will see these themes throughout this letter. But what we should see in this prayer is the ongoing nature of the life of the believer, that growth occurs in the believer’s life. We are always, called, beloved, and kept but as we go on our journey we see the increase of mercy, peace, and love in our lives. We should be reminded of what God has done for us but also be praying for God to show us more of these precious things in our life. This is a great prayer to pray for others as well. These things come from that golden bracelet of security found in the markers of a Christian, those who are called, beloved, and kept.