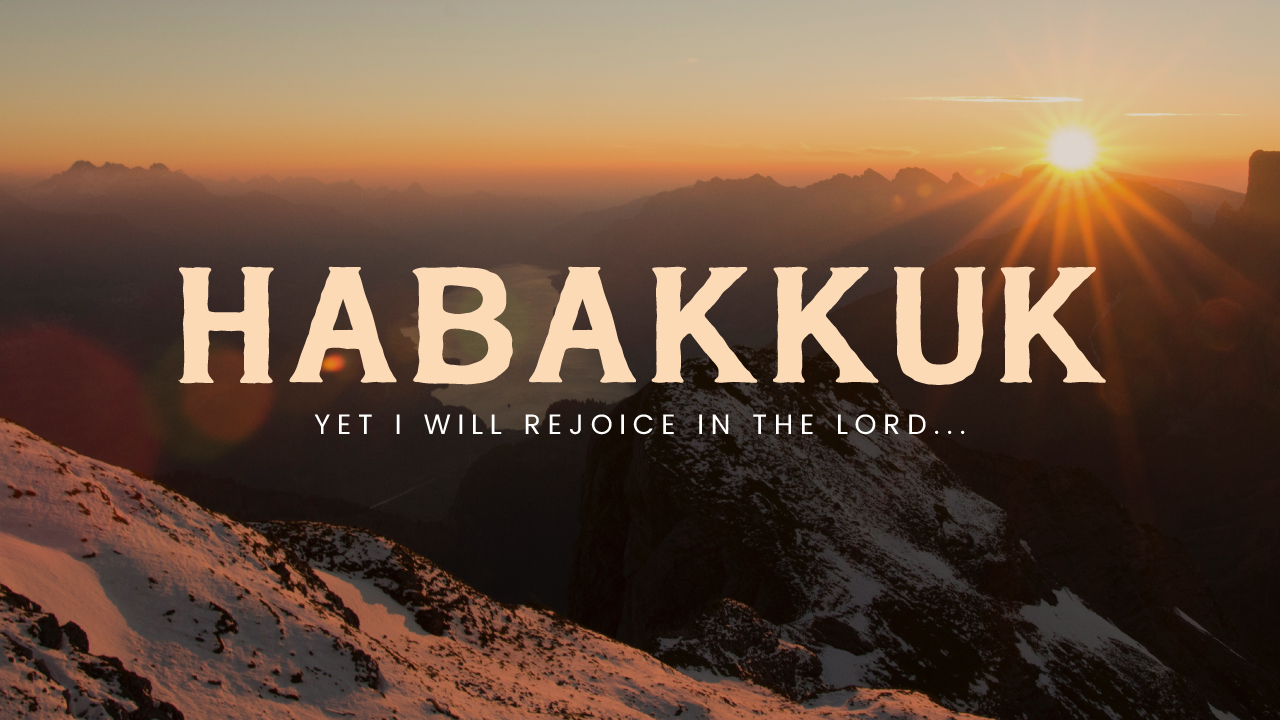 We will begin studying the book of Habakkuk. The book was written during a very dark and depressing time for the southern kingdom, Judah. After King David’s son, Solomon, passed away the kingdom was divided. The northern kingdom, Israel, consisted of ten tribes of Israel. The northern kingdom, never had any good kings. All did was evil in the sight of the LORD. The northern kingdom fell to the mighty Assyrian army in 722 BC. The southern kingdom had some good kings, Asa, Jehoshaphat, Joash, Amaziah, Uzziah, Jotham, Hezekiah, and Josiah. Habakkuk is most likely written following Josiah’s reign, which ended 609B, (Torah/Law reference in Hab 1:4), and before the battle of Carchemish in 605 BC (Hab 1:6). The battle of Carchemish saw the demise of the Assyrian empire, who were the superpower for about 150 years. Josiah’s death was a shock to Judah, and his son’s reign, Jehoahaz, only lasted three months. The Egyptian pharaoh, Neco, made Eliakim (Josiah’s other son) king. He also changed his name to Jehoiakim. The pharaoh implemented a tax for Judah, enforced by Jehoiakim. Judah was now a puppet. The king was no ruler but a pawn. The author of 2 Kings explains that Josiah “Before him there was no king like him, who turned to the Lord with all his heart and with all his soul and with all his might, according to all the Law of Moses, nor did any like him arise after him” (2 Kings 23:25).

Habakkuk is written during this time. Josiah is dead, and the kings that followed do not have the strength of David and his armies, nor the heart for the LORD like Josiah. Judah had seen the fall of their cousins in Israel about 120 years before. They look like they will be slaves again to Egypt. Habakkuk, (חֲבַקּוּק) his name comes from the Hebrew root “embrace” or “wrestle,” his name is only given twice throughout the book (Hab 1:1, 3:1). Little is known about Habakkuk; Rabbinic explanations give several opinions about the Prophet’s past: 1) he was the son of the Shunamite woman (2 Kgs 4:16). 2) The watchman of Isaiah (Is 21:6 cf. Hab 2:1). 3) one apocryphal text (Bel and the Dragon) says that Habakkuk was the ‘son of Jesus of the tribe of Levi.’ Habakkuk was likely a Levite, possibly a temple singer (3:1, 19; 1 Chr 25:1-8). Habakkuk might have lived through the reign of Josiah and served in the temple, hence his lament about the wickedness of Judah.

Habakkuk writes of this downward spiral from the heights of Josiah repairing the House of the LORD (2 Kgs 22:3-7) and leading to Hilkiah the High Priest to find the Book of the Law. Josiah showed humility and reformed all of Judah, cleansing the temple of idolatry, tearing down high places, deposing priests, and reinstated the Passover, which was not celebrated for 400 years. Josiah reformed the nation and especially true worship of God according to the scriptures. Josiah’s abrupt death in the battle of Megiddo started a quick succession of Kings. Josiah had reigned 31 years, beginning at the age of 8. Jehoahaz reigned three months, Eliakim (Jehoiakim) ‘reigned‘ 11 years. Habakkuk has seen this change from a king whose heart was for God to Kings who had done evil in the sight of the Lord. He cries to Yahweh, the covenant-keeping God of his fathers, and asks him melancholic questions. Habakkuk sees the demise of Judah and the threat of an Egyptian pharaoh ruling them again, like before the times of Moses.

I. Stranded in silence

Habakkuk complains to the LORD, Yahweh, asking him how long? Seasons of darkness and depression can be bearable if for a moment, but the darkness is hardest when there is no light at the end of the tunnel. Habakkuk does not ask how long this will last, but how long will I cry for help, and you will not hear (Hab 1:1). Silence from God is deafening. Habakkuk is not asking a philosophical question while sitting at an office desk, but a heartfelt question. God is silent to his cries for help.

A moment I have a very vivid memory of is standing alone in a blackened room that was soundproof. I had a friend who worked at a church that finished constructing a sound recording studio in their church. They gave me a tour of the newly constructed studio. The studio was professionally designed and built. It was not a couple of mattresses in a basement. They showed me the recording booth. I stepped inside, and they closed the door (they told me it was coming). The room was black, with no light, complete darkness. I could not see my hand in front of my face. That was scary. However, the scariest part was the silence. I was left alone with my thoughts. Soon I began to hear my own heartbeat. When we think of silence in our house, we think of no screaming children, and “what mess are our children making?” Silence sounds peaceful, but this is not always the case. Some of the darkest times in the Bible are often when God is silent. The book of Samuel begins by explaining that the Word of the LORD was rare in those days (1 Sam 3:1). Dark and depressing times are often faced with silence. However, Habakkuk warns us that sometimes we don’t get the answer from God we want. We will look at this next week when the Lord does answer Habakkuk’s cry for help.

II. Suffers with no salvation

Habakkuk delves deeper into his complaint to God. Not only does he cry out for help, but he also cries out “violence,” and God does not save them. The same cry for salvation is found in Job 19:7. Habakkuk has a high theology of Yahweh, the covenant-keeping God of his fathers. Violence is what the world was filled with in the time of Noah (Gen 6:11-13). If God saved David from violence (2 Sam 22:3); Why wasn’t God saving Habakkuk andGod’s people? Habakkuk points out that God should do something; he knows God is the God of just judgment. Not only is God silent, but he is also not judging the violence that Habakkuk is pointing out.

III. Sees the strife before him

Habakkuk’s laments go deeper. He wishes he could not see the violence and destruction. Habakkuk desires to go back to the time when he was a little child, and if he closed his eyes, it didn’t exist. If he could cover his face with the blanket, then he would not be able to see the strife before him.  But again, Habakkuk has a robust understanding of God. Not only does he see it, but God sees it and does nothing. God is all-knowing, and he has seen this destruction, violence, strife, and contention. Not only do God has to see it, but he also has to do something about it. God is the just judge who has to punish sin. This is not from a Facebook post on the other side of the world but on Habakkuk’s threshold.

Have you felt this pain and cried out for God? You see the breakdown of the family structure, the lack of respect for parents and others. Do you know the devaluing of life, violence, murder, abortion, euthanasia? Do you see the degradation of marriage as God has made it, the rise of pornography, sexual revolution, unnatural lusts, confusion of human sexuality? Do you know the theft of personal property, looting, daylight robbery, oppression, extortion, exploitation, bribery? Do you see the slander, lies, false testifying, calling evil good and good evil, concealing the truth, undue silence in a just cause? Or do you see envy, discontentment, jealously? Habakkuk sees this before him and laments before God.

IV. Surrounded by wickedness without justice

Habakkuk’s final part of his complaint is that the justice he does see is injustice. He states the law (Torah) is paralyzed. Judgment and justice never see the light of day. What is called justice is false justice. Lamentations 1:5 says, “Her foes have become the head; her enemies prosper because the Lord has afflicted her for the multitude of her transgressions; her children have gone away, captives before the foe.” This is what is happening to Judah, Egypt is surrounding them; they are soon to be slaves again under the same nation but a different pharaoh. Habakkuk is a depressing and dark book. A lament, which we have lost in our Christian culture. We do not know how to lament well. Many modern songs only speak of joy and happiness. We do not sing or pray the Psalms of lament (Ps 13, 22, 44, 60, 74, 79, 80, 85, 90). Habakkuk gives us an insight into how we might be able to handle emotions during dark and depressing seasons in our life.

While studying in the dark tunnel of Habakkuk, we always need to remember the light, which is at the end of chapter 3. Habakkuk 3:18, “yet I will rejoice in the Lord; I will take joy in the God of my salvation.” We can ask questions, we can complain to God, we can be upset, hurt, and angry at the injustice and sin we see before us. We also need to remember that the greatest injustice that happened in all of human history was the death of Jesus, the Son of God, the sinless man who died the death that we deserved so we can live the life that he deserved. The gospel is the story of injustice.