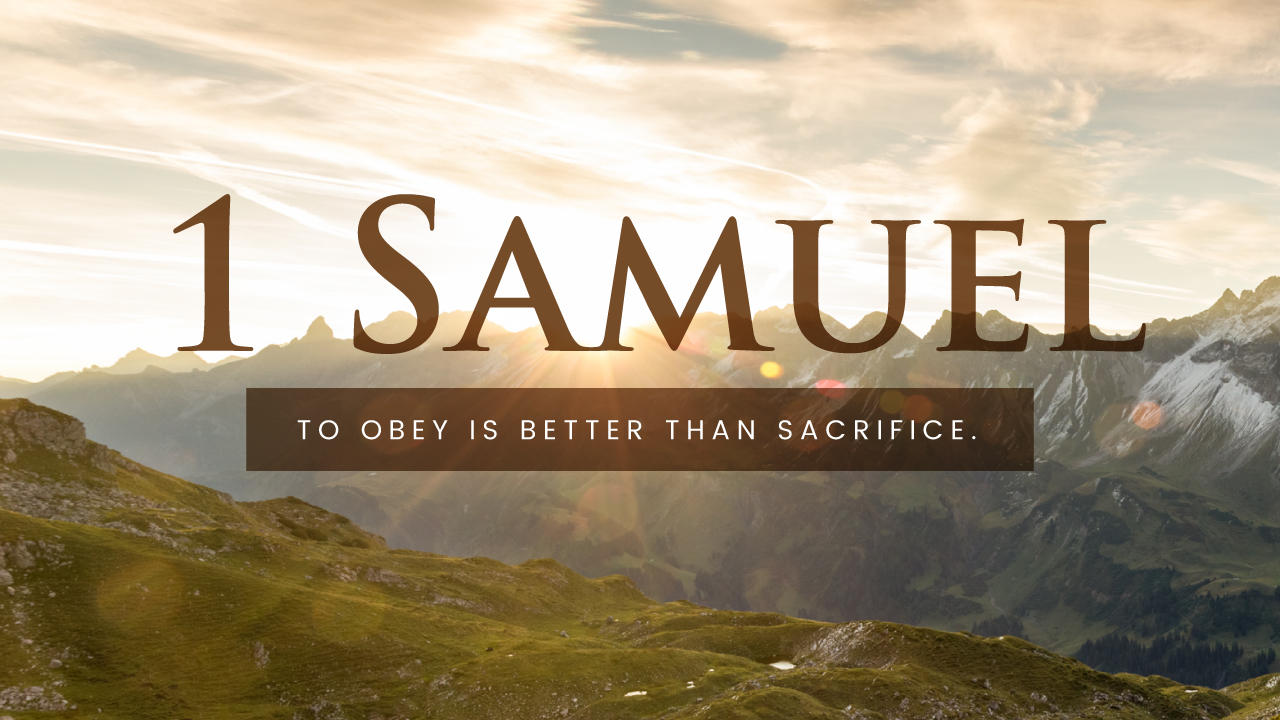 We are about to begin a study on 1 Samuel for our Wednesday night bible study. 1 Samuel is a phenomenal book that looks at the establishment of the monarch in Israel. The setting of 1 Samuel is a dark and depressing time, following the time of the Judges. The repeated phrase “In those days there was no king in Israel” (Jud 17:6, 18:1, 19:1, 21:25). However, the more bloodcurdling phrase that is uttered is, “everyone did what was right in his own eyes” (Jud 17:6, 21:25). The holy nation of Israel who was to be set apart from the other nations for the glory of God did not obey their king, God. The close of the book of Judges is not a happy fairytale ending, in the closing chapters men want to commit crude sexual acts, and a woman was murdered, she was divided into twelve pieces and sent throughout the territories of Israel (Jud 19:22-30). Sin was pervasive in the times of the Judges. A dark time for Israel. 1 Samuel is like the heroic stories we heard growing up, with the key heroes of Samuel, Saul and David. While also having some important characters, who play vital parts to the story line, Hannah, Eli and Jonathan. We see the rise and fall of men, epic rivalries, and classic good versus evil (David and Goliath). I would encourage you to spend time reading this book in the Bible. Here are some key themes you will find as you read this book.

Israel begs for a King just like the other nations. Like Verruca Salt, from “Charlie and The Chocolate Factory,” who sees a golden egg and just has to have it. The Israelites saw that other nations had kings, but they didn’t. They didn’t need a man to be their king because they have the covenant with YAHWEH. The Lord was their king, he rules and reigns (Ex 15:18). “The Lord of Hosts who is enthroned on the cherubim” (1 Sam 4:4). God had given them a law to govern and direct them (Ex 20, Dt 5). The law does not forbid a king but gives a warning (Deut 17:14-17). The human king is still subject to God as the King.

“And when he sits on the throne of his kingdom, he shall write for himself in a book a copy of this law, approved by the Levitical priests. And it shall be with him, and he shall read in it all the days of his life, that he may learn to fear the Lord his God by keeping all the words of this law and these statutesand doing them.” Deuteronomy 17:18–19 (ESV) (Emphasis mine.)

God speaks, but who will listen? 1 Samuel gives us the last Judge but also the start of the Prophet that we come to get to know (Moses was a prophet, Dt 34:10). However, other prophets would come after Moses and would be the voice of God to the people of God, especially the king (Think of Nathan with David (2 Sam 12)). The people cry out for a king (1 Sam 8:5), they do not listen to Samuels warning, but they reject God as their king over them (1 Sam 8:7-8). They get what they asked for, Saul. Saul’s name in Hebrew actually means, “what was asked for.” It was a dark time during the time of 1 Samuel and the word of the Lord was rare during this time (1 Sam 3:1). However, God begins to speak, but who will hear and obey. God also hears, he hears Hannah’s prayer for a child (1 Sam 1), but also the people’s cry for a King (1 Sam 8). Not hearing and obeying is the great demise of Saul and his kingship (1 Sam 15:19-23). This theme continues even to the words of Jesus who said, “Therefore everyone who hears these words of Mine and acts on them, may be compared to a wise man who built his house on the rock” (Matt 7:24).

Many books in the Old Testament talk about the heart. The heart is more than a muscle that pumps blood through the body. The heart the epicenter of the person. The heart is their being. The contrast that is found in the book of Samuel sets many characters opposed to each other; Peninnah/Hannah; Eli’s sons/Samuel; Saul/David. Each contrast shows the outward appearance compared to the heart. “Do not look on his appearance or on the height of his stature, because I have rejected him. For the Lord sees not as man sees man looks on the outward appearance, but the Lord looks on the heart” (1 Sam 16:7). This is the major difference between Israel’s selection of Saul and God’s selection in David. Even sincere repentance shows the heart of the person. We see Saul and David sin, however, how they respond to sin is drastically different, inward and outward. The heart motif in 1 and 2 Samuel sets the stage for the continued discussion in 1-2 Kings (Cf. 1 Kings 11:4-6; 2 Kings 14:3). As we think and consider what the prophet Ezekiel will write, “I [God] will give you a new heart, and a new spirit I will put within you. And I will remove the heart of stone from your flesh and give you a heart of flesh” (Ezek 36:26).

Ultimately, 1 Samuel, like the rest of the Old Testament points to Christ. God’s kingdom is found in the book of first Samuel and as Jesus begins his ministry, as the son of David who will sit on his throne forever, says, “Repent the Kingdom of heaven is at hand” (Matt 4:17). David is a type of Christ, pointing to Christ who comes as the true king who hears and obeys. The true king who has the perfect heart. Christ rules and reigns perfectly. We do not need Christ to destroy a nine-foot giant for us, but to destroy our greatest enemy, sin. Join us on Wednesday nights at 7:00pm to go through this amazing book of the bible as we see prayer seeped in tears, disobedient children, faithful friends, epic battles, the original raiders of the ark and the start of the monarchy in Israel.